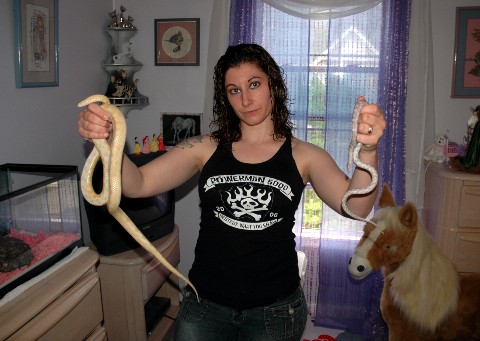 Believe it or not, the smaller snake is only a few months younger than Cornbread. This little guy is a rescue from someone that fed him one pinky mouse a week.

He is also going to lose a nice chunk of tail from numerous bad sheds.

And he has been officially dubbed "Perry the Periwinkle Cornsnake".

Mostly because Ellen and Amber thinks he's caught teh ghey. And with a bit of TLC, he'll be back to fabulous in no time.

"Super, thanks for asking!"

Thank you Amber for volunteering to take care of him at your house!

i just got 2 baby corn snakes. how many times a week do you feed them. i fed mine tuesday for the first time then yesterday they were hungry and ate again. am i feeding them to much