This deal is getting worse all the time...

Bloomberg is reporting that President Barack Obama's budget cuts rely heavily on reductions in military spending, and several other news organization said the same over the weekend.

Looks like it's time to order a few of these: 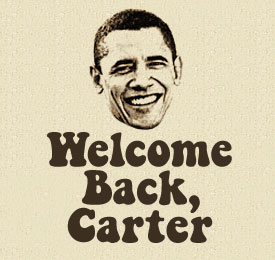 Iffin' this is true, and it looks to be, that tee is dead-on and right in line with my predictions. Take a bad situation, throw in the best intentions, and make it hella worse.

And a side note: since the "stimulus" bill included all sorts of Democrat pork spending, cutting defense spending to reduce the deficit is nothing more than pulling the money from something that he and his cronies don't like and putting it somewhere they do. The net effect economically? Probably zilch or worse.

So far this appears to be the biggest "by the numbers" screw up we've witnessed in quite some time.