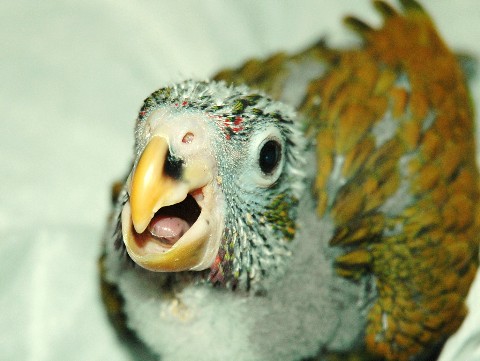 It's official! Pinkie Pi is a girl! We have been waiting for a permanent name until we got the DNA results.

A bit on how we chose the name of our bird.

The "Swoose" is the oldest B-17 Flying Fortress in existence. It is also the only known U.S. military airplane to have flown a combat mission on the first day of the US entry into World War II and to remain in continuous military flying service throughout the conflict.

The aircraft is in storage at the National Air and Space Museums Paul E. Garber Preservation, Restoration, and Storage Facility at Silver Hill, Maryland.

This was the first "Swoose" flown by Frank Kurtz, and is the inspiration for his daughter's name, Swoozie Kurtz - the actress

Why did I pick the name? Well, Scott's a font of all sorts of useless trivia (shocking, I know), and the real Swoozie is on Pushing Daisies, our favorite new series. It was impossible to stop him from telling me the story, and the name caught my fancy. We've got one other pet named after an airplane ("Wobbly" is Goblin's "silent" first name), so why not? At least this one's supposed to fly!

And it's our parrot. We'll name it what we want!

[Why yes, we do both have Nerd merit badges, with oak leaf clusters no less. And thank you for noticing!-- Scott]

Congratulations!!!
When I met Swoozie I thought she looked like a girl. Just another mother's instinct. I kind have liked Pinkie Pi for a name but yes you are the parent and get to name it whatever you like.

Hahaha.. Ma ya know I will call the bird Pinkie Pi!

Better than Bockscar, no?

Too cute! Did you go through a breeder?

yes, I got her from DJFeathers here in VA