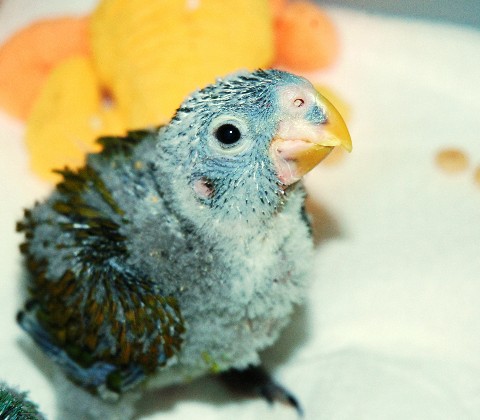 I got to see our parrot today for the fist time! TOO CUTE! 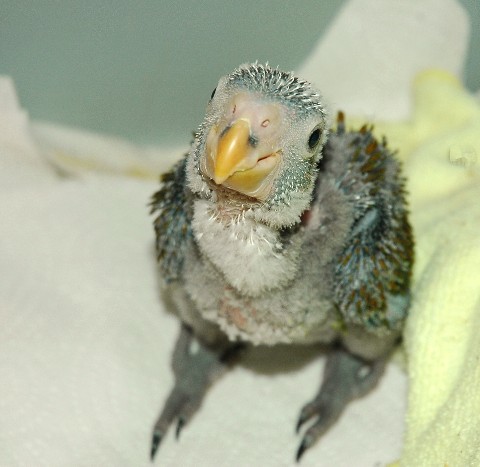 AWWW! Now the baby is starting to look cute.
(First picture looked a little sad a few days back, but has started getting those feathers in now.) Wait until you hear "Mama", I'd like to hear "Aunt Cindy"

First pics I couldn't even tell what kind of birds they were. Hard to tell one baby bird's butt from another, ya know?

Much better pics this time. What kind of parrot is it?

Ya know, it's kind of amusing when the owner of the site double-comments.

You know - it makes me wonder what kind of weight limit one would have on an unladen swallow.

E's just a lil' trigger-'appy, is awl.
(mails Scott a no-prize with its feet nailed to the perch)

This lady decided that she wanted to get a parrot. She did all the right research, bought all the right gear, and finally went to a rescue society to get her bird.

"Well," said the manager, "we've only actually got one bird available. He's a nice boy, and he knows how to talk...but that's actually the problem. See, he was rescued from a whorehouse, and he's picked up some kind of...saucy phrases."

The lady decides that she can live with this; the manager brings out the covered cage, and she drives it home. She installs the cage in the new Bird Room, and uncoveres it. A large African Grey picks up his head, looks around, and says "...RAAWK! New house, new madam!"

The lady thinks "oh, my! Well, if that's the worst, I suppose we can just laugh about it."

A few hours later, her two daughters get home. The Grey looks at them and says "...RAAWK! New house, new girls!" The lady passes it off as a joke.

That evening, her husband gets home. As he walks in the door, the Grey cocks his head and says "...RAAWK! Hi Bob! Hi Bob!"