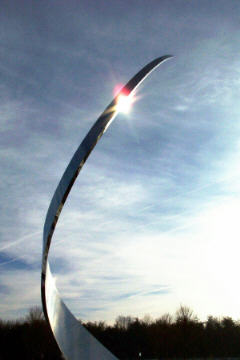 After perhaps fifteen years of on-again, off-again planning, the Smithsonian finally has its Air and Space annex. It is very, very good. Not the least because it's less than five minutes from my house. Predictably, the first day it was open found me without a car and roads so covered in white crap bicycling was dangerous. The next day, though, was different. I had a car, I had a camera, and I had a destination. Kick the tires, light the fires, let's go fly!

The first thing you notice about Udvar-Hazy (OOD-var HAH-zee) is it's big. Really big. The pictures just don't do it justice. It takes raw size and transforms it from an adjective into a noun. This place has bigness like a dog has rabies. Acres of brushed steel and blue glass dominate an otherwise flavorless pine grove, red Virginia clay sticking out anywhere they ran out of sod, like a fourteen year old pancaking makeup for the prom.

As I pulled up to the parking lot gate, I noticed frantic activity. This must've been what an Iraqi border checkpoint looked like as the tanks pulled into view. Well, except they didn't have guns, and I didn't have a tank, and we weren't at war, and... oh hell, at least the attendants definitely weren't from around here.

"EmployEE?" a reasonably friendly face asked me. He was standing fifteen yards in front of the main gate, the arms of which were going up and down pretty much at random, like a drunken semaphore operator with a nasty twitch. A technician narrowly missed getting clobbered by one particularly vengeful barrier.

"No, sorry, just here to see the museum."

So I pulled quickly through the chop-sake parking barriers and into the glistening-wet parking lot, finding a nice close spot. Of course, the parking lot wasn't wet, it was covered in black ice, which I only discovered after doing the classic mime interpretation of "man tossed into air, landing on ass." After gingerly making my way up to the entrance, I discovered that I was a full hour early (which explained my excellent parking spot), so to kill time I explored the grounds, and then read a book until the doors opened.

Now, November through February is the "off" season around here. In June the tour groups are thicker than bugs on a bumper, but in December they're actually manageable. So, even though this was a premier opening, the crowd buildup was nothing compared to, say, the downtown museum on a July morning. There was still a healthy crowd in front of the door, it just didn't wrap around the building.

The place is just as big on the inside as it is on the outside. A small stunt plane hanging from the ceiling looks just like a toy until your eyes focus and you realize it's a real airplane hanging upside down thirty feet in the air. It certainly made the ubiquitous metal detector scan go by faster. While waiting my turn, the nattering French tour group next to me was suddenly surrounded by museum staff. It was only when the guy with the "director" name tag said, "thank you for your airplane!" to the lady standing next to me that I realized I was looking at Air France executives.

After running the metal detector gauntlet, I was in. I was in. I felt the exact same chest-twisting tightness that makes a child tigger-bounce through Disney world. My damned shoelaces even came untied as I turned the corner.

The museum is, for now at least, basically one gargantuan room over 1,000 feet long, 250 feet wide, and 100 feet high. It's all done in white, with a shiny concrete floor (no gross gum blots like what cover the carpeted floor downtown). The fresh-paint-and-sawdust smell that dominates any new building overwhelms the gear-oil bouquet of the pickled vehicles placed inside, but only just. The entrance places you on the mid-level walkway, so you stroll out into the middle of this free space, like you're flying yourself.

Look more closely though, and you'll realize just what a rush it must've been to get this place ready in time for the Wright Brother's anniversary. The place is just flat not finished. Big sections are nothing but gray floor, waiting for future exhibits. Display cases stand empty save for laser-printed "RADIO HISTORY HERE" sheets of paper taped to their doors. The new "space hangar" is for now simply a construction site with a space shuttle sitting incongruously at its center. Overall, the impression is of a mall opening on the first day... lots of great stuff, yes, but lots of blank walls with "coming soon" stamped on them. 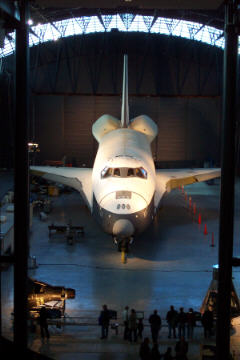 In reality, Udvar-Hazy is simply a nice, far more accessible place for the Smithsonian to display the more presentable items that have always been available at the Paul Garber facility in Silver Spring. Of course, now instead of making an appointment to be taken through freezing storage sheds by a cranky old man with a flashlight you can stroll at your leisure in climate-controlled comfort. But if you managed to visit the old facility you will easily recognize 90% of what resides in the new.

This is not to say what's there is not fascinating. Lots of really amazing aircraft sit on perches or hang from the ceiling. Further, they're not all showroom-perfect like most of what's downtown. Some still have bullet holes. The displays are simpler, dedicated solely to the vehicles instead of getting sidetracked into "hands-on learning centers." If you've ever been to the Datyon museum, it's like that only newer, less crowded, and more diverse.

After viewing most of the collection I decided I could not miss the observation tower, that titanic faux control tower that punctures the site's skyline like the bridge of a particularly tacky starship. The tower's finished, but the elevators aren't... you have to go down to the ground floor and then pick the lone elevator up to the top of the 150-foot-plus spire. The elevator took so long to arrive I really did begin to think it might be broken.

But oh, what a view. Looking out of this carpeted, furnitureless space was amazing indeed. They placed the facility at the end of and between the two main runways of Dulles, closer to 1R (north bound, right side) than 1L (north bound, left side... duh). Of course, being at the end of these runways means the terminal was a full two miles away, but it was quite clear in the distance. Mornings are slow at Dulles, but anyone with a scanner and a set of binoculars should be able to track any aircraft from pushback to takeoff, final to hookup.

The second level of the tower held a curiously windowless air traffic control exhibit. While fascinating, it was left intentionally vague while the Smithsonian wrestles with the FAA to get Dulles radio and ATC radar piped into the displays. For now you know you're looking at an ATC radar and hearing its radio chatter, you're just not sure where in the world that might be.

Oh, and fitness freaks may be tempted to skip the too-long elevator wait and simply walk down the obvious stairs next to said elevator's doors. However, after a featureless fifteen story trudge you'll discover yourself dumped blinking at the sun outside with suspicious finishing contractors looking at you going, "que?" Leading, of course, to a fifteen story leg-crunching walk up the same concrete dusted stairs to get the elevator down. How do I know? None of your damned business. And I resented all the funny looks I got when the sweaty panting white guy got on the elevator down.

Could I have stayed longer? What, are you crazy? If they'd let me I'd set up a cot under the wing of the SR-71. But, since as previously noted this place is less than five minutes from my own warm bed and family, I decided (for once) not to memorize every single placard and guidebook in the place. I'll be back.

And if you play your cards right, I'll take you with me.

Very informative thanx. A view from the Top would be great! Do you have any Pics of that View?

Just one, not real good, but
here ya go

tell me how the "Air and Space Annex" differs from the Air & Space Museum that they've had for many years???

The downtown museum hasn't changed at all. The problem is airplanes are huge, and they had a lot of really cool stuff that was simply too big to display there. Further, their restoration facilities were never meant to be permanent, they just sort of ended up that way.

The annex is meant to provide a place to display *any* of the A&S collection, as well as (eventually) provide a purpose-built permanent restoration shop and document storage facility.

If there had been room to place a 150+ acre facility next to the downtown museum, that's where the annex would've ended up. Unfortunately there's not, so they put it out at Dulles, where a lot of the really big stuff was already stored.

We may have to go there w/ ya some day!! Very cool.

Victor, AAARRRRRRR, went to North Carolina yesterday to watch the planes TRY to take off, he said it was worth it, watching more history NOT happen, haha.