A Poverty of Expression

One of the things not often understood about our modern world is that, in many ways, we have solved the problem of poverty. Hopefully you weren't drinking anything when you read that, because if you were I have a feeling you just blew it all over your computer, but hear me out.

Poverty, along with organized warfare, government, writing, and beauracracy, is at root an invention of the agricultural age. Before the time of the plow, as hard as it is to imagine, there simply were no poor, at least not in the sense we understand the term. People lived in very small groups, typically no more than 40. Greed was kept in check because hoarding didn't do you any good. You never lived in one place for more than a few months, and if you couldn't carry it on your own back it quite literally was not going with you.

Agriculture changed all of this in a hurry. About 15,000 years ago groups of people scattered around Eurasia discovered tall grasses that naturally grew in the deltas around various flood plains were actually not all that hard to raise yourself, and if you worked at it for awhile you could make quite decent meals with the stuff. More importantly, it gave you a reliable supply of the raw ingredients for various fermented drinks (such as the true elixir of the gods, beer1).

The decision to settle down to grow crops wrought profound, far-reaching changes for humanity. We'd been hunters and gatherers for so very long our biology had adapted to the diet that lifestyle provided. Now we were confronted with coarse, extremely simplified diets that (among other things) wore out our teeth and shortened our stature2.

But the cultural changes were much more profound. Farmers that group together are much more efficient than they are alone, and the food surplus that results is far larger than anything that could be gathered or killed. This allows even larger groups to live together, and from there it's just a short hop to the first city-states 3.

Even more important for our purposes, the agricultural lifeways allowed greed to rear its ugly head in a most extreme fashion. Fields don't move, so you were forced to settle in one place, which for the first time in human history made hoarding on a grand scale possible. The formation of governments, pretty much required to allow agriculture to work on a really large scale, allowed the strong to take from the weak and hoard not only food, but later money and other valuable goods.

All of this combined to form an impoverished underclass on a scale that simply doesn't exist in the industrialized world anymore. The demographics of ancient civilizations, especially western ones, is that of a stylized pyramid (see Figure 1), with the vast majority of people making up what we would call "the poor" (broadly, those people existing at a subsistence level 4), accompanied by a very, very small, almost unimaginably wealthy and powerful upper class (in Roman times estimated to be less than 5% of the total population), and essentially no middle class. 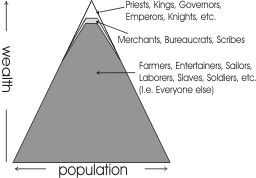 What is remarkable about our modern industrialized lifeway is not how wealthy certain individuals are able to become. There have been people as rich Bill Gates and Donald Trump and King Fahd and Reverend Moon for as long as we've known how to turn grass into flour, and flour into steel. What is remarkable about a modern industrialized society is how wealthy everyone else is.

Because the pyramid really hasn't changed all that much. Study after study has found that something like 90% of the "wealth" (whatever that means) is still owned by a "measly" 10% of our population. What they tend to leave out is the remaining 90% of the population is emphatically not living at a subsistence level.

By historical standards even the people we would all consider "poor" are wealthy beyond all reason. Today, in industrialized countries, when we talk about poverty we talk about people with drug habits, people with mental illnesses, people cheated out of opportunities or denied the ability to make a "living wage".

We're not talking about people rotting in the streets from leprosy, or kept in constant fear of legal murder because they happened to be born with the wrong last name (or without a penis), or denied the ability to feed themselves because a group of thugs needed supplies to fight a different group of thugs on the other side of the mountain. These are truly poor people, and not a one lives inside any country commonly recognized as "industrial", or "westernized". Poverty, as it was known for more than ten millenia, has ceased to exist in our particular part of the world.

All of this could be taken as denying there is a poverty problem in the western world. Not by a long shot. As I've said many times before, genius strikes in random places, on random people, at random times. A society which runs on idea and ideals as ours does must find and encourage the growth of these geniuses regardless of where they live, what language they speak, or what color their skin happens to be. We're not doing it, and this is the real problem.

Don't complain to me how rich just a few people are in this country. I can see the yachts in the harbor as well as you can. Don't scream at me about how unfair it is that some people inherited what they have while so many others sleep on the street. I already know how tough life is. Don't tell me it's all the fault of an uncaring majority and an inhumane government. Unlike you, everyday I see people make stupid decisions and yet receive help from both.

Because until you tell me these things, until I see you really working at these things, you're nothing but an unimaginative sack of hot air.